Now, of course, there is some stuff I haven't seen yet this year and that may very well wind up on the list. Friday Night Lights and most of Treme, both likely to yield results in the category of "Best Stuff I Liked" from 2010, but I'm not likely to see it until I get the DVDs next year. Might be a couple of movies like that to, but I doubt it. The Social Network. Not only did it feature a virtual Holy Trinity for me in the form of screenwriter Aaron Sorkin, David Fincher and Trent Reznor, but each of them stands an excellent chance of an Oscar nomination. Sorkin's script was masterful, not just for the usual Sorkin dialogue or characterizations, but for the way he synthesized the Rashomonesque multiple viewpoints of Facebook lawsuits and their participants into one linear narrative that still contains multiple viewpoints and thus a tricky level ambiguity that doesn't leave you unsatisfied. And Reznor's first film score (with Atticus Ross) was a very different beast a film scores go, but it hit all the right...umm...notes.

I also thought that The Losers was pretty damn awesome for the first two/thirds of it. So much so that I kinda wished that I'd written it, until the final third kicked in. It carried and transferred Andy Diggle's voice form the comic book so well. It blended serious action with both black and self-aware humor extremely well. The ending just sucked though, on pretty much every level. It was like somebody else came in and wrote that last 20-25 minutes or so.

Inception was good too. It's not that the end was a dream or not, it's that it didn't matter that it was a dream. 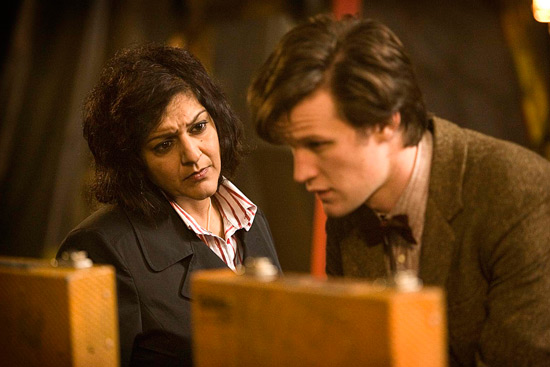 On to TV, where my favorite things of the year, all turned out to be British. It was the first season of the Steven Moffat-run Doctor Who, and everyone was primed to expect too much, including me, but overall, I was really very happy with the new show, and the new Doctor. I can probably do without Amy Pond, but she's okay, I guess. In fact, in was in two of the three episodes I didn't really care for that much that I saw the person I'd really like to see as companion. Nasreen, the middle-aged geo-scientist. The standouts though were--okay, I was going to nail it down to two or three, but it's hard. Matt Smith has an exemplary first episode, there were four River Song episodes, and Richard Curtis wrote a peculiar episode that will make you tear up. Overall, Moffat took his meta-structuring to a new level with his season long arc.

Then there was Sherlock. Double the Moffat, double the awesome. Well, not really double, as he produced it teamed with Mark Gatiss and of the three extra-long episodes, the second one dropped the ball and let it roll under the fridge. The fresh take on Holmes scored with modernisation and characterization while staying true to the Holmes mythos. My favorite scene has got to be the very simple, non-story-intrinsic scene where it's made clear that Sgt Donovan regards the OCD detective as a probably psychopath while Holmes also deduces that she's been screwing the married forensics guy. The DVD is well-worth looking at for the alternate pilot, a one-hour version of "A Study in Pink." The story was completely reshot, so there's different locations (some of significance) and a different handling of the crime's resolution.

Luther rounds out the trip of BBC awesomeness. I've written about it before here (go look), but it's a great look at a broken man who is still a fantastic detective. There's procedural elements, but it's a character driven six-ep series. Idris Elba gives a performance that will make you forget about Stringer Bell and Ruth Wilson puts a whole new face on evil.

American TV was not devoid of awesome. Eureka, for instance, a show I was content to ignore for several years found an intriguing way of shaking things up and subverting convention when several of it's cast went back in time, changed the future (their present) and they didn't change it back to normal. This left some characters in completely different versions of their lives. It was bold, logical for a TV series and even upset some people. People who, from their reactions, I say deserve to be upset.

This also turned out to be a great year for bottle episodes, those episodes of TV series designed to be contained entirely in standing sets, therefore saving quite a bit of money. Even better when they don't use any guest cast either. These restrictions usually result in increased creativity from the writers. In 2010, Leverage pulled off a fantastic con (the appropriately named "The Bottle Job") entirely in their bar set, McRory's. On Breaking Bad, Walter's obsessive and misplaced battle against potential meth contamination by a "Fly" aided and abetted by Jesse, was a great psychological examination of a guy coming apart. On Community, "Cooperative Calligraphy" locked the ensemble cast in the study room, casting accusations and fostering total mental breakdowns (but in a funny way) in a quest to find Annie's pen. If you watch carefully, you can see what happened to it right in the first minute.

AMC was busy ripping TV a new one. Breaking Bad, of course, rocked. This year of Mad Men might be my favorite with it's greater focus on the ad agency and not much Betty. I hate Betty. And not just in the way that Matt Weiner want me to hate his mom her. Rubicon was mostly too smart for the room, resulting in a conspiracy-laden single season, but it really shined when they figured out not to serialize the entire series and did single episode stories based around the think tank members not directly involved in or investigating the conspiracy. Dallas Robert's Miles was a breakout character as we watched him fail to connect with a translator and freak out by witnessing rendition first-hand. I'm gonna miss this show. Now, however we have The Walking Dead, zombies as catalyst for drama. It needs tightening up for damn sure, but it got off to a fantastic start.

On FX, Sons of Anarchy lived like it's subject matter MC, the way it fucking wants to, and the finale payoff was a thing to behold. Terriers lived it's short life, but it was a beautiful thing and it just got lost in the shuffle. The writing was spot on in this series the blended the best elements of The Rockford Files, Veronica Mars and the buddy cop genre into a perfect blend of seasonal arc and episodic storytelling. And Donal Logue should get a fucking Emmy for what he did here. A far cry from that sitcom I can't recall the name of. And I got to go to the premiere.

My thoughts on Lost, are here.

In comics, Rucka's Stumptown, also owing a great deal to The Rockford Files, brought the PI concept to comics, along with the character of Portland, OR. His Batwoman run in Detective was also pretty damn sweet.

Paul Cornell is in the midst of Knight & Squire, a comedic British take on Batman and Robin. Great fun.

OK, I'm tired of typing, so I'll finish by addressing music with just this: