TENSPOTTING - AN OUT OF THE (POLICE) BOX ROM-COM 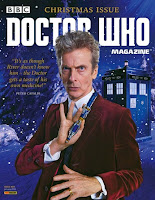