In the West Wing Universe, the elections happen on different even numbered years and there are past fictional presidents, yet real life U.S. and presidential history is referred to as well. At one point did the real world diverge into the Sorkinverse? With the aid of some TV history, some real history, some conspiracy theories and a little too much Cherry Dr. Pepper, I shall endeavor to answer this conundrum that has plagued mankind for the last 18 seconds. 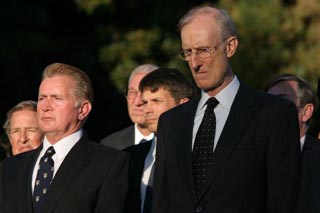 Nixon is mentioned by name at least twice in the series. Specifically, in "17 People" and "Access." There is no mention, that I recall, specifically of Carter, Reagan, Bush the Elder, or Bubba. While there may be mention of policies or something that might be tied to those administrations, that can be reattributed to a fictional president. Also, in regards to Nixon, in "Six Meetings Before Lunch" there is mention of the panda(s) gifted the U.S. by China, which could lead one back to Nixon, but I'm not going to assume that and we already have a couple of Nixon references (only one actually puts him in the White House though).

We know of two predecessors to Bartlet. Lassiter, a two-term Republican, and D.Wire Newman, a single term democrat.

This only accounts for half the years between Nixon's resignation in 1974 and Bartlet's election in 1998. We know that Bartlet succeeded a Republican, so it was likely Lassiter. This would put his administration running from 1990-98. Thus, Newman's term was probably (but not necessarily) 1986-1990.

The change is narrowed from 1974-1986. With no mentions of who was in office in that period, it could be fictional or reality-based. Or both. Rather than take a full-on dump in sandbox I do not own, let's just pee a little by basing the shift from our world to Sorkin's on something already existing in reality. And then spinning it wildly like a coked-out ballet dancer.

Let's say that Ford took over for Nixon and was succeeded by Carter who then lost to Reagan as it was in real life. But what happened after that to move the election cycle two years and cause Democratic and Republican eras to essentially become reversed? That's some fuckin' upheaval, son.

These are also facts. Reagan was shot by John Hinckley. John Hinckley's brother is Scott Hinckley who knew Neil Bush, son of George Bush (I). They were alleged to be friendly and were set for a dinner engagement that was cancelled after John went bat-shit crazy. The Hinckley's had an only company. We know that the Bush family likes oil companies (Neil worked for Amoco at the time) and have worked for and/or owed them.

Hinckley had a history of being a little bat-shit already. He was prescribed drugs by a psychiatrist. He had previously been detained in what was likely an attempt to kill Jimmy Carter. He had guns with, crossed state lines and a journal detailing his plan. He was released.

Bush (I) was a former director of the CIA for year, not that long before running with Reagan. The CIA ran mind control experiments.

Here's where I go off the rails.

While in he was the DCI, perhaps he went noodling around in the files of people he and his family knew. He found John Hinckley was part of a program to create sleeper assassins in an extension of MK-Ultra, called MK-Omega. There were given bizarre psychoses (impress young actresses) to mask their underlying program (in his case, eliminate troublesome presidents). His programming misfired or accidentally activated at one point and he tried to go after Carter, but rather than lose the asset, the Company had him set free.

Reagan taps Bush for the Veep spot in '80 and, as in real life, they win. Now he's in a power position, more so if that pesky former actor were dead. Bush activates Hinckley. Hinckley is successful. Reagan is dead, Bush is now in position to carryout his family's fascist leanings (Prescott Bush was a huge dick too). It's now April 1st (apropos, no?) 1981 and Bush is sworn in.

However, John Chancellor on NBC news first uncovers the Neil Bush/Scott Hinckley connection. It is followed up and eventually the whole conspiracy is unraveled. Coming so soon after Watergate, the nation can scarcely take this level of shenanigans (to put it lightly). Bush in impeached and indicted. Bush's appointed vice president, former Secretary of State Alexander Haig gets to finally utter the words he did in real life "I'm in control here." But Tip O'Neill ain't having it. Trust has deteriorated too far in the country and in a special joint session of congress, a special election is enacted. Haig vetoes. The veto is overturned by the required majority and in 1982, the presidential cycle is reset.

It was such a disaster that no one talks about it...ever. Whoever the next female president is, that's the first one.

NEXT GEEK THEORY:
I don't have one. I'm open to suggestions.