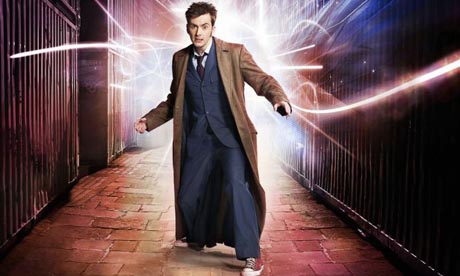 If you don't watch Doctor Who, just don't bother.

And by the way, you're missing out on one of the most fun and best written shows currently in production. You...Dave...are you watching this? Why not?

So, in the original series of Doctor Who, it had been expressly stated that Time Lords can regenerate 12 times, allowing for a total of thirteen possible incarnations. It has been demonstrated that this limit can be cheated by a few means.

The Master employed some of the nastier ones, like hijacking bodies for his own use. The High Council of Time Lords had at one point offered the Master a new cycle of regenerations for his cooperation and success in a mission to save the Doctor. He cooperated...for a while. Then he tried to kill him, so no new cycle for him.

This is the key to my theory. Time Lords are not born with regenerative abilities. In fact, let's not even call Time Lords a race, even though that's what the Doctor does. Gallifreyans might be a race, but Time Lords are what they become, through selections and training. There have been references to Time Lord Academies, after all.

In the only Eighth Doctor adventure, the Master had plotted to steal new regenerations by jacking something called the Eye of Harmony. It is an artificial black hole that powers all the Time Lord's endeavors, including, apparently, all the TARDISes. Either there's a mini one on board or it's a connection to the main one or something, I dunno. I don't care.

My theory is such that the Time Lords grant themselves regenerations using the power of the Eye of Harmony. They capped it at twelve for philosophical, legal, and/or practical reasons but ultimately, since they control it, they can change their own rules and offer the Master more regenerations of they want. General rule though: You get twelve and then you die.

Since Time Lord's are linked to their TARDISes psychically, then they can access the Eye whenever they get killed, inside or out of the TARDIS. most of the Doctor's have happened outside.

When the Master regenerated from Derek Jacobi to John Simm in the new series, he'd already gone past his twelve and at least two hijacked bodies. Who knows how he wound up looking like Derek Jacobi. He did it anyway. He was in a TARDIS at the time. Not his, but being a Time Lord, it's not unreasonable to think that he could establish a link to one when he's fucking in it.

But what of the limit?

Well, the Time Lords are all dead. There's no one around to enforce the limit. The Master went to town. Kid in an infinite energy candy store. He not only regenerated for an umpteenth time, he seemed to even choose his appearance (something that had been established when Romanaregenerated in the original series).

So, no worries that the Doctor is starting to run out of lives like a Super Mario player who's gone well past his level of Troopa-trampling competence. He's about to hit his eleventh incarnation. (i.e. ten regenerations). He's only got two left. Nope. he's got as many as he wants as he has the only (known) remaining access to an/the Eye of Harmony. So we get to the end of the thirteenth Doctor (let's call him James) and a little writhing and pretty pretty lights and we get a fourteenth doctor (let's call him Russell). Business as usual.

NEXT GEEK THEORY (maybe):
At what point did the West Wing universe divert from our own and what caused the presidential election cycle to shift two years and was it the same thing in both cases?