COOL STUFF BY PEOPLE I KNOW 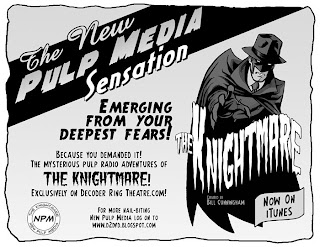 Pulpy goodness from the Mad Pulp Bastard himself. I likes me a little pulp now and then, but this guy is the pulp master and he proves it in The Knightmare.

As a fan of the old timey Shadow radio shows, this audio drama by Bill Cunningham and produced by the Decoder Ring Theatre is right up my alley and the Bastard nailed it. Check it out, it's free and awesome and it comes in two chapters, two chapters.

Fury of Solace
Originally begun as an entry for the Dr. Horrible contest that had fans producing their own applications for the Evil League of Evil. Now, creator and star Emmett Furey is hard at work spinning it into a multi-media empire. In July he starts it as an online series, but with the twist that not every episode is int he same format. Some are videos, some are comics, there's music and minisodes. I can't wait for this to get underway. Emmet is also one of the brains behind Bumps In the Night on Strike.tv. Check it out, for 'tis a fine ghost hunting comedy.

"A Frond in Need" was written by Brynn Malone. She's cool and an awesome giver of notes in my writers group. Watchable online at the moment.

I only know her internetularly, but I'm sure that will change sooner or later, but Elisabeth Fies has made what is, by all accounts, a kick-ass horror flick. I really wanted to see it at the Dances With Films festival, but couldn't make it, so I'm hoping that sooner, rather than later, I'll get another opportunity. Theatrical release, DVD...just gimme some creepy.

I'm even more excited to see Pistoleras. A female spaghetti western, How cool izzat? She's gotta make it first, though.

I intend to make this cool stuff a recurring feature, so people I know should get crackin' on making cool stuff.