Continuing my review of my favorite episodes of stuff from the last calendar year. Not necessarily the best of the year, but ones I liked for one subjective reason or another. 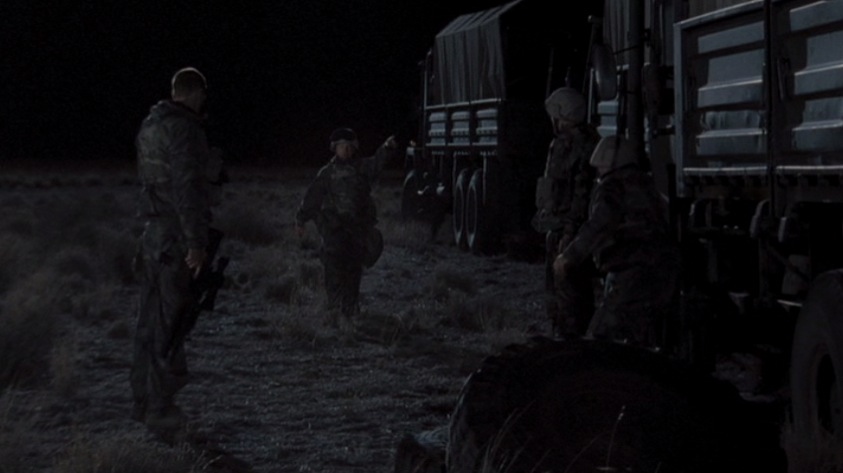 GENERATION KILL: "Screwby"
Teleplay by Ed Burns
Story by David Simon and Ed Burns
Bravo Company awaits for their next orders for a recon mission, having survived its first trial by fire; whilst scoping out a roadside firefight, they watch in shock as a regimental combat team arrives with guns blaring, and they watch on as the hamlet is obliterated; Encino Man requests an artillery strike on a phantom RPG team; Fick tries to take control of a dangerous situation; Ferrando issues a new, more urgent order shortly after Alpha Company shells Ar Rifa.


There will be spoilers.
I totally identified with this episode. Not because I have personal experience shooting accidentally unarmed civilians, taking airfields or otherwise engaging in military operations in Iraq. Or, you know...anywhere. Aside form my mercenary experiences in the former Rhodesia in the mid-to-late seventies.

And these are elements that I think most of us probably have experience with, generally in some form of employment. I know that when I watch something set in a war zone, there's a part of it that I'm watching for the interest in subject matter and, yes, even a sense of adventurism. I'm not in the military, never have been. So there's a little disconnect in the way I see these things...perhaps in the way most people see these things, given that most people haven't been in the sandbox. But in "Screwby," I was able to tap into some of the same feelings as the soldiers involved. Certainly none of the more profound ones, but when their superior officers do...just...stupid things. We've been there.

When the LT directly informs his superior officer, who was, first of all, ignorant of relevant intel by not being on the comms (and risking his career by not standing by like a good little robot) that the RPG team was dispatched and that there is no threat and that officer, "Encino Man," ignores to word of the guy who was just handing the shit and gives an artillery order that endangers the unit, except for being directly endangered, I've been there. Encino Man is that middle manager that doesn't know what the fuck is going on, thinks he does and won't listen to you because you do know what's going on and you're, in fact, the one doing it.

Then you've got the Sergeant Major who orders the supply truck left behind. From one stance, it's causing a delay in the mission and his responsibility is to keep moving, but all the grunts know that they need those supplies and that, in fact, leaving a supply truck full of M-16's, ammo and 400 pounds of C-4 and chow is, essentially, arming the enemy. And none of them can say a damn thing because that man has the power to seriously fuck their lives. In the recent past, I've had this displeasure of working for a management team with a blistering inability to think even one step beyond their immediate decisions. Theirevery improvement, is two detriments.

And in that case, it's made all the more assinine because the mission was to ninja an airfield from under the British, who were much better equiped to do the job anyway.

But when the unit stands up to their Colonel when a young boy that they very probably shot is close to death and needs to be evacuated, they're faced with several ugly truths. One, they themselves have not considered the big picture. They're thirty miles behind the lines and don't have adequate resources to get the boy to help. Second, the rules of engagement say that the boy isn't entitled to the same level of aid that they would be in the same position. The frustration that you thought you knew the rules and you didn't. I know that. And that the rules that exist, fucking suck. I know that.

But this was Burns and Simon form The Wire, which was half about higher-ups defeating their own purposes for political reasons wile the lower-downs are just trying to their job. They've kinda got a niche in that sense. Be it B'mo or the box, shit all falls down the same.

So for these reasons that I can apply to just about anytime I've ever worked for a jackass or in less than ideal conditions, I rate this episode as one the better empathic, realistic war stories I've seen. Watch that D-Day sequence of Saving Private Ryan all you like. Unless you've been fired on, you don't know what it's like and be thankful that you never will.

And be thankful that there are guys who did so.