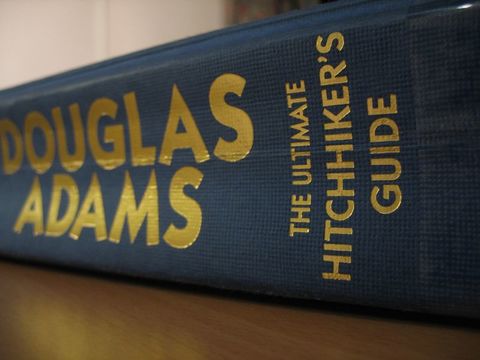 So this Eoin Colfer chap presumes to continue and/or conclude the Hitchhiker's Guide to the Galaxy Trilogy with a sixth book. Or is it seventh? Are we counting The Salmon of Doubt?

He writes the Artemis Fowl books. Fine tomes, to be sure. But to this development, I say thee nay. As in "fuck, no!"

This is new for me. I've never had some book series I hold dear undergo the money-grubbing continuation by people who presume to be able to be a dead author (even when they're related to them). I liked the Dune series, but it had already gone past me by the time Frank Herbert kicked, so no great thing there.

I will not spend money or so much as flip though this...wrong thing. I would say I wouldn't be in the same room as it, but that would preclude me being in bookstores, so a line is drawn there...but no further.

What's worse is that Colfer says he will try to capture Adams voice while injecting some of his own. Uh, no. Hitchhiker's books are pure Adams and any deviation from that will just feel off anyway.

I know there is a tradition of mutation in the H2G2 stuff. That what amused me most about so-called die-hard fans that complained that the movie wasn't true to the book. Yeah, well the book wasn't true to the radio series...and Adams wrote both.